Tests are a significant part of the VersionPress project, we care about writing and maintaining them. They live in plugins/versionpress/tests and there are several types of them, from unit to full end2end tests. They all run in a dockerized test environment.

Note: the ./frontend app has its own tests, this section is about core VersionPress tests (PHP code) only.

The first run might be very slow as Docker images need to be pulled. Subsequent runs should take between 10 and 30 minutes, depending on your machine and how you run Docker runs (for example, Docker Toolbox on Windows uses slower virtualization than Docker Desktop).

The tests script accepts PHPUnit parameters, here are some examples:

❗️ Notice how parameters come after --; this is required by npm.

Running and debugging tests from PhpStorm¶

This section has not been updated for the new test runner (PR #1401) yet; you can see how it worked previously here.

This method is more universal and works for PhpStorm, VSCode and other IDEs. You generally do this:

First, make sure you have the 'VersionPress-tests' server defined in Settings > Languages & Frameworks > PHP > Servers. If not, run npm run init-phpstorm.

Then, set a breakpoint in some test and start listening for debug connections in the toolbar.

Run TODO in the console, skip the first break at the wp binary and see your breakpoint hit: 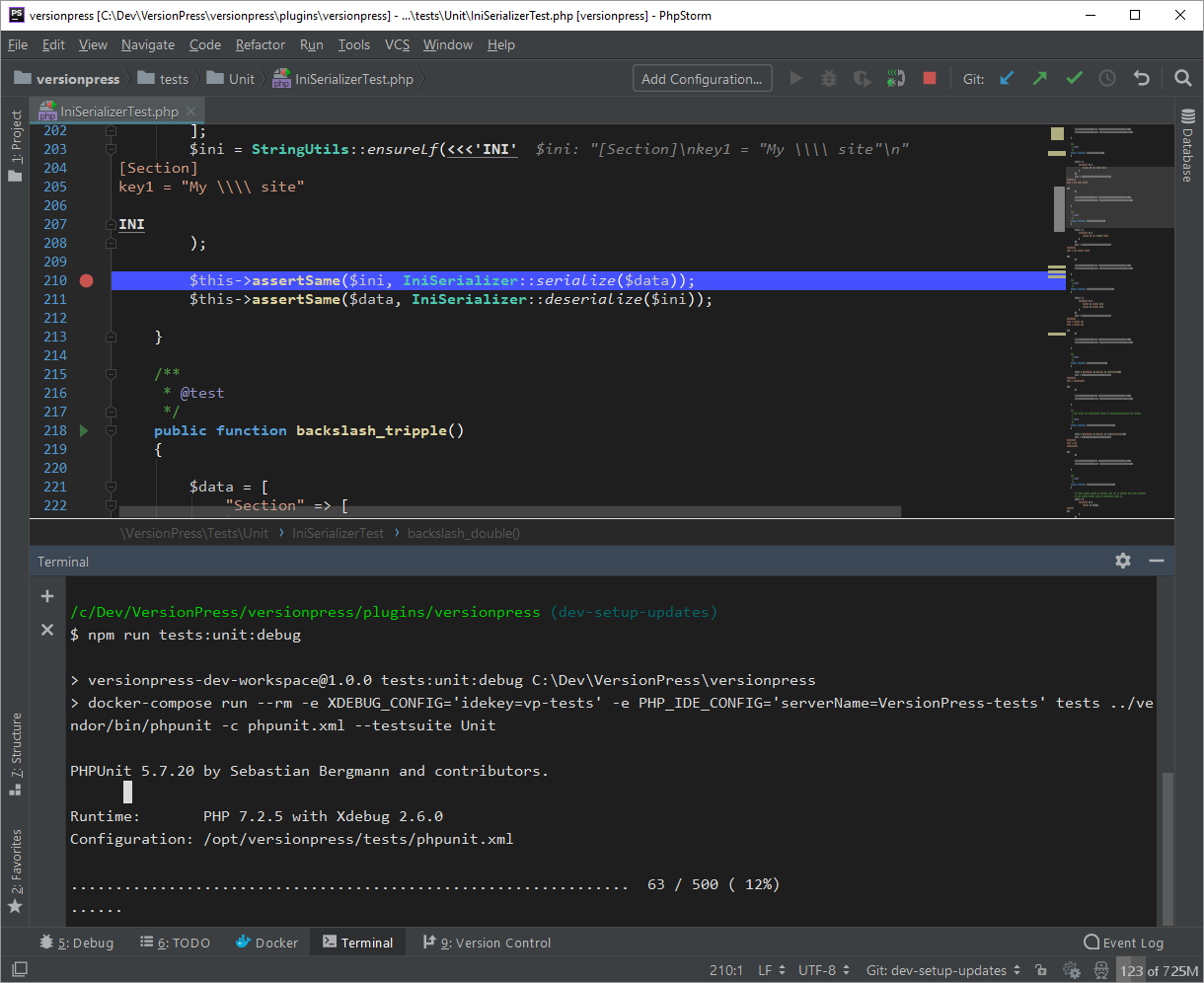 In VSCode, install PHP Debug extension and create a launch.json config containing this:

Then, start a debugging session in VSCode and set a breakpoint. Run the TODO script and see the breakpoint hit: 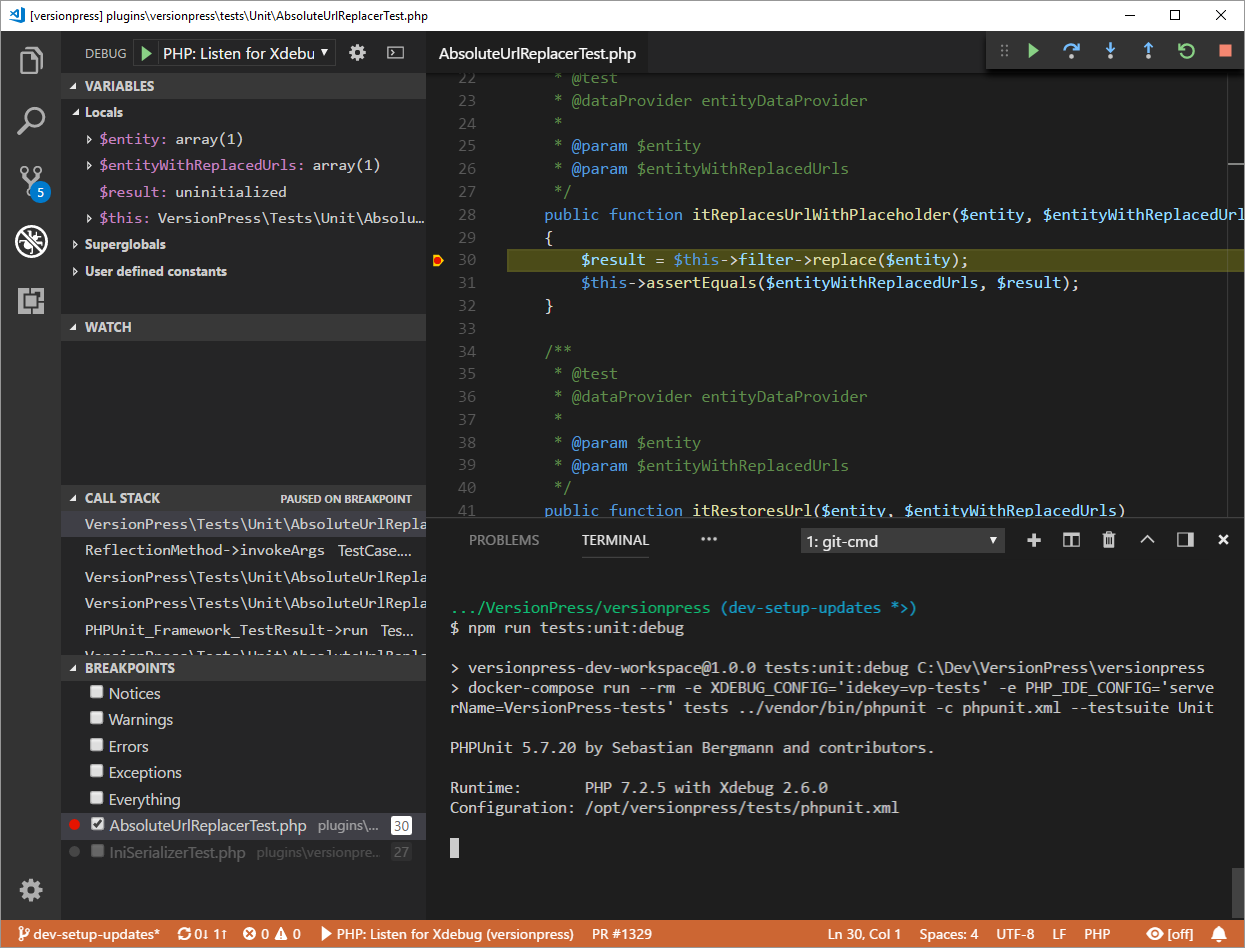 Unit tests are best suited for small pieces of algorithmic functionality. For example, IniSerializer is covered by unit tests extensively.

You can either run unit tests in a dockerized environment as described above or set up a local CLI interpret which makes the execution faster and more convenient.

End2end tests exercise a WordPress site and check that VersionPress creates the right Git commits, that the database is in correct state, etc. These tests are quite heavy and slow to run but if they pass, there's a good chance that VersionPress works correctly. (Before the project had these, long and painful manual testing period was necessary before each release.)

End2end tests use the concept of workers: each test itself is implemented once but how e.g. a post is created or a user deleted is up to a specific worker. There are currently two types of workers:

In the future, we might add REST API workers; you get the idea.

Currently, the default worker is WP-CLI and the only way to switch workers is to update tests/test-config.yml, the end2end-test-type key. We'll make it more flexible in the future.

The Docker containers are stopped when tests finish running but the data is kept in Docker volumes. You can start the WordPress site again via:

You can now inspect it:

When you're done, clean up everything by running:

This will stop & remove containers and delete temporary files in dev-env.

The project has these other types of tests (folders in the ./plugins/versionpress/tests folder and also test suite names in phpunit.xml so that you can run them using --testsuite <SuiteName>):