This will set you up for VersionPress development. 👩‍💻 👨‍💻

If you're not familiar with Docker, this is great quick start. We also have some tips for you.

This software is expected on your machine:

Git Bash (part of Git for Windows) is required on Windows, please use it instead of cmd.exe / PowerShell for both interactive sessions and as your npm script shell:

Tip: From time to time, it's useful to clean up everything and pull latest Docker images. Run npm run refresh-dev.

To start a development site:

This will start a set of Docker containers in the background. When everything boots up, log into the test site at http://localhost, install WordPress and activate VersionPress on the Plugins page. You're now all set up! 🎉 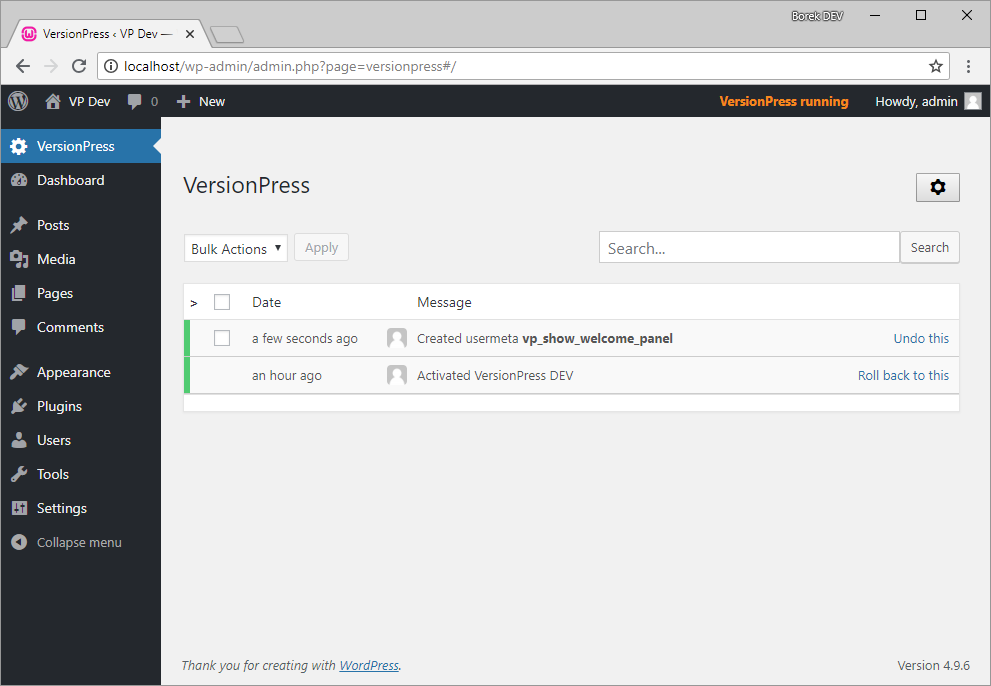 Some useful tips for managing your Docker environment:

VersionPress consists of PHP code implementing the core versioning logic and a React frontend. This section is about the former, the latter is described in Frontend development below.

For PHP development, we recommend PhpStorm and ship project files for it. The steps here have been tested in PhpStorm 2018.1. 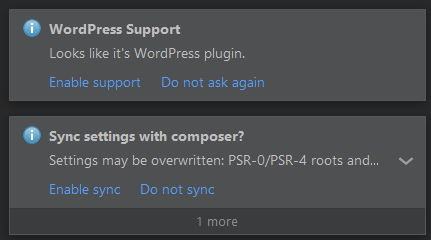 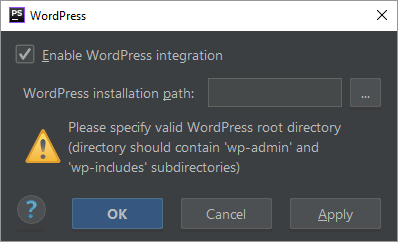 For Code Sniffer inspections to work, there's a one-time configuration: Go to Settings > Languages & Frameworks > PHP > Code Sniffer, select Local, click the three dots next to it and provide your full system path to ./vendor/bin/phpcs.

Note: Most VersionPress code uses the PSR-2 coding standard with only the parts directly interacting with WordPress using WordPress conventions. For example, global functions are defined as vp_register_hooks(), not registerHooks().

It is also useful to install the EditorConfig extension, VersionPress ships with some basic formatting rules.

Please refer to the Contributing code section in CONTRIBUTING.md.

In PhpStorm, go to Settings > Languages & Frameworks > PHP > Servers and check the path mappings of the pre-configured VersionPress-dev server. Specifically, update the WordPress mapping which PhpStorm does not persist automatically: 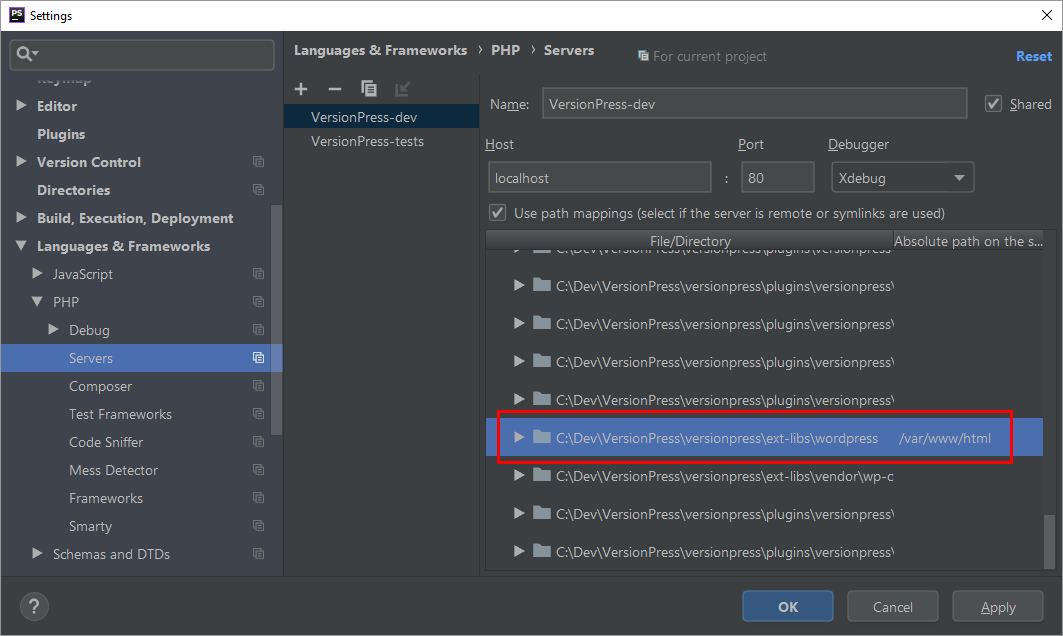 The two mappings should be:

Enable debugging in the browser, most commonly using a browser extension or a bookmarklet:

Place a breakpoint somewhere, e.g., in the main versionpress.php file, and start listening for debug connections in PhpStorm.

Reload a page in your browser. Debugging should now work: 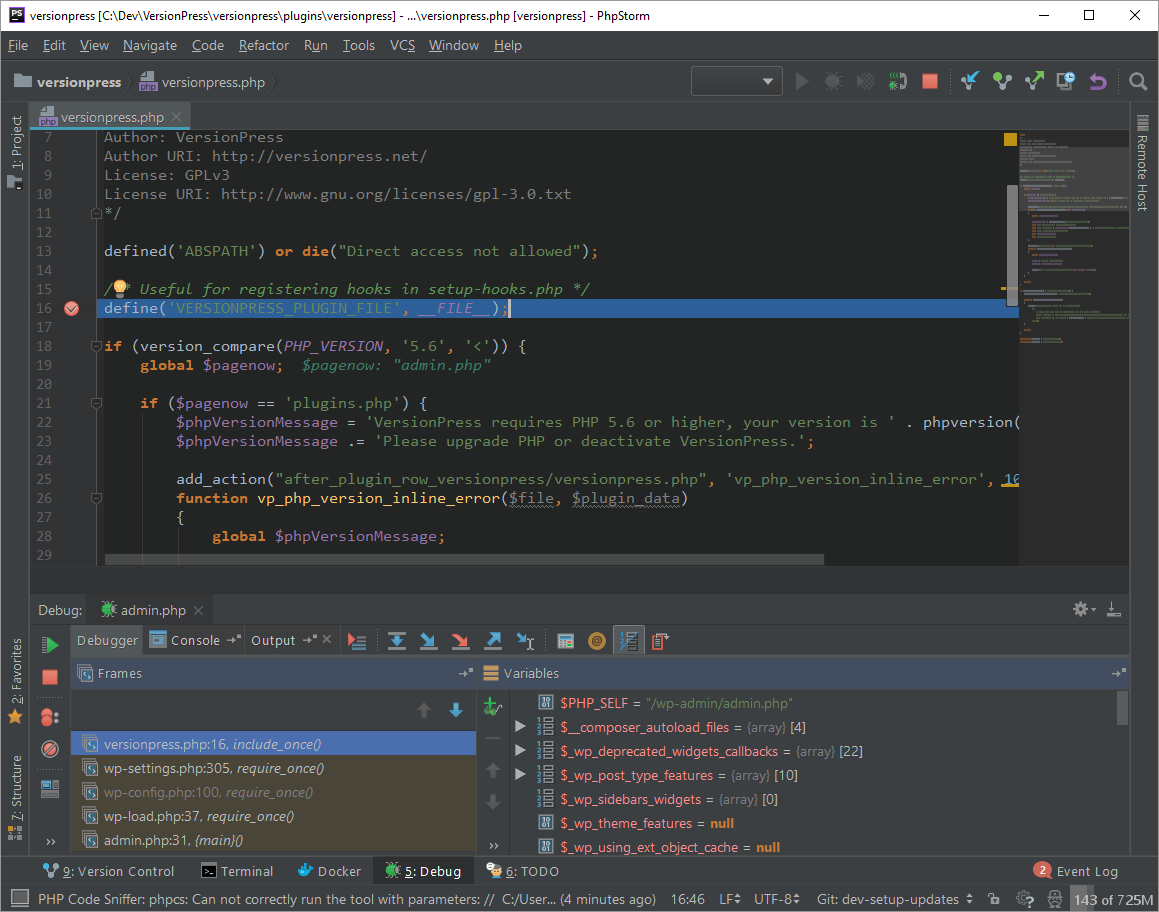 After you're done with debugging, run npm stop or npm run stop-and-cleanup.

VersionPress uses a JavaScript frontend implemented as a React app in the ./frontend folder.

For pure frontend development, it's more convenient to run it outside of the WordPress administration. Let's assume you run the frontend against the default Docker site.

Source code edits will be automatically reflected in the browser.

Run npm run build, it will produce a file like dist/versionpress-3.0.2.zip.

The version number is based on the nearest Git tag and can also be something like 3.0.2-27-g0e1ce7f meaning that the closest tag is 3.0.2, there have been 27 commits since then and the package was built from 0e1ce7f. See git describe --tags for more examples.

As noted in Getting started, we only support Git Bash on Windows, a shell that comes with Git for Windows. cmd.exe or PowerShell will not work as we use Linux-style syntax (single quotes, setting environment variables, etc.) and tools like curl or rm -rf in scripts.

Git Bash is generally an awesome shell, the only problems you might encounter are related to paths. For example, Docker messes with them and when you try to run docker run --rm -it ubuntu /bin/bash, you'll see an error like C:/Program Files/Git/usr/bin/bash.exe: no such file or directory. Docker prepends C:/Program Files/Git for some reason but you can use this workaround or use double slash like //bin/bash.

If you can, use Docker Desktop, not Docker Toolbox. The experience will be smoother (for example, ports are forwarded by default) and also the performance is much better due to a more modern virtualization technology.

You'll notice a big difference between Docker Desktop and Docker Toolbox, for example, tests run 3-4× slower in Toolbox (10 vs. 40 minutes). You might also run into various timeouts, for example, wp_remote_get() has a default timeout of 5 seconds which might not be enough.

Note that it's generally hard to improve the performance of Toolbox, even if you give the virtual machine more CPUs and RAM, see these results for tests.

If you need to use Docker Toolbox because you have an older machine or OS, brace yourself and follow these steps:

You might want to disable your antivirus software when working with Docker. Recommendations differ between version, please look it up.

Meta! If you're working on updating the dev setup (this document, Docker images, etc.), here are some tips for you.

Simpler tasks are scripted directly in package.json, more complex ones in the ./scripts folder. See its README for more info.

We're keeping our images close to two official ones, wordpress:php7.2-apache and wordpress:cli.

The only goal of our images is to be close to the official project and have the right environment in it, e.g., the PHP version. We don't care that much about specific WordPress versions (WordPress is often installed dynamically anyway, based on test-config.yml) so we only use "vague" tags like php7.2-apache or cli.

To build and push tags to Docker Hub:

You can get Docker Hub digests by running:

Legacy approach is documented at the 4.0-alpha1 tag: